Our sensory overloaded world has many distractions, usually to do with money and status.  This concept is often debated in articles concerned with the state of our modern lives.  We humans have the ability to see only the illuminated gold of greed and ignore what lies beyond, the reality.  Frequently discussed in philosophy and mythology, the belief that people make a conscious decision to ignore what fundamentally lies beneath the fabric of society is a theme portrayed in a new instillation from artist Tatjana Este.

The installation and video performance uses gold leaf covered apples, eaten by the artist herself, to present a concept based around the theme of distraction.

Symbolism centred in Greek mythology is woven as a metaphor throughout the instillation. The vision of a goddess entices you to look at the golden apple.  In Greek mythology Eris, the goddess of discord, tossed a golden apple into the feast of the gods at the wedding of Peleus and Thetis, sparking a vanity-fueled dispute that eventually led to the Trojan War. Thus, the apple of discord is used to signify the core or crux of an argument, or a small matter that could lead to a greater dispute.

The instillation comprises two parts. In the first, apples are delicately sliced, dried, gilded, coloured and intricately arranged with care in patterns that evoke visions of an exotic location.  The use of gold around the apples is “alluding to a packaging, visually luring and enticing us to make an unconscious choice” says the artist.  The ‘packaging’ refers to what influences our choices, how items are marketed with neat cellophane or designs that visually attract the consumer.  Ultimately the idea is to distract us from what lies beneath. 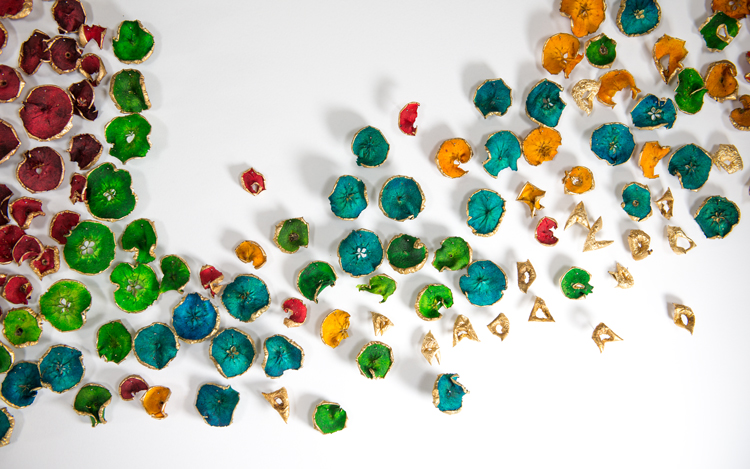 Knives wound in red yarn hang beneath the apples.  As your eyes follow the fluid bright yarn suspended from the intricate golden apple arrangement, the cold silver of the knife tips comes into focus. As a secondary thought to the gold and red, one remembers the damage a sharp edged knife can cause. The knives point at gilded apples on the floor, surrounded by red powder, as if a body were laid out in a pool of blood.  The red powder and knives seem to warn the viewer of sinister elements at play. 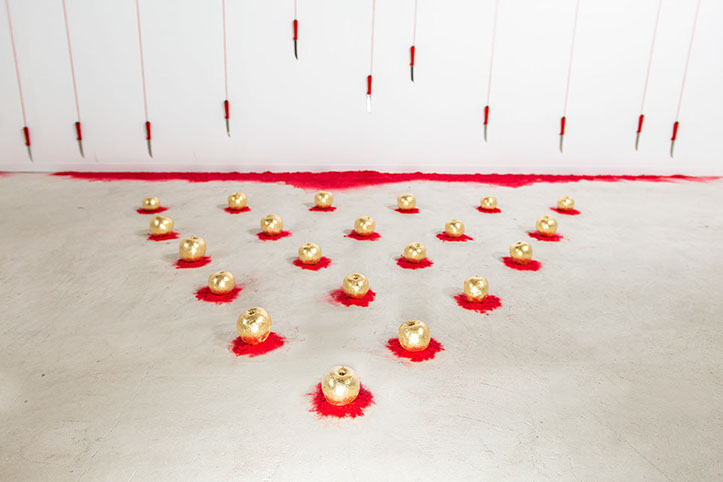 By contrast the second part of the installation has a stark and muted colour palette.  Red yarn stretches between dried tree branches and red powder.  This part of the installation features a performance video interspersed with black and white footage of factory farm pigs.  Here the organic nature that lies beneath the gold leaf and patterns is evident in the stark contrast between the gold, flowing red yarn and pigs. 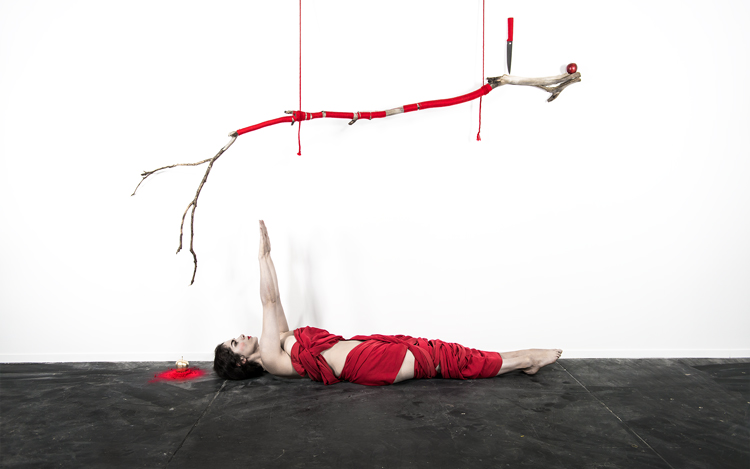 Based in part on the artist’s vegan attitudes and observations, this component of the  instillation is intended to cause conflict between distraction and what inevitably can lead to awareness.  Against background noises of animal screams and the deep breaths, the artist eats the gold gilded apples.  Our senses are torn between the beauty and the agony of the sounds. The original sin of being seduced by the sweet fruit is a symbol of knowledge and burden.  What is exposed behind the lustre and colour as the layers peel away, as we reach the core? It is the internal struggle of the individual trying to break free from the constraints of distraction, wanting to understand why we fail to recognize the reality that lies at the core of the beautiful, sweet, golden fruit. 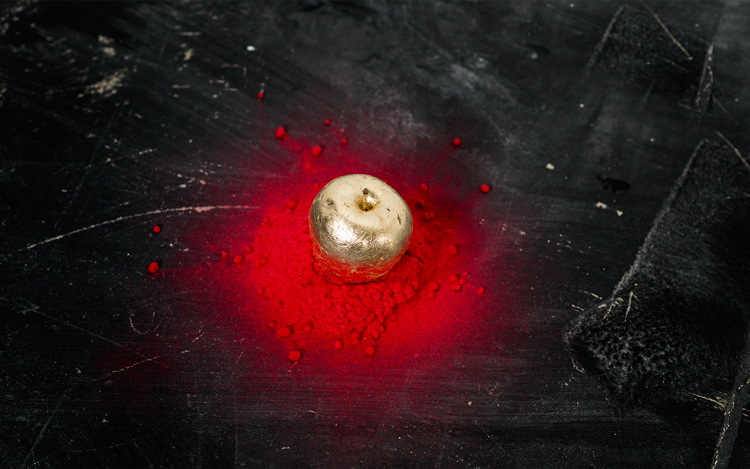